Mr. Gurdjieff pursued during many years , through countries of the East, investigations which proved that Oriental dances have not lost the deep significance – religious, mystic, and scientific – which belonged to them in far off ages.
Sacred dances have always been one of the vital subjects taught in esoteric schools of the East. They have a double aim: they contain and express a certain form of knowledge and at the same time serve as a means to acquire an harmonious state of being. The combination of unnatural movements helps to obtain certain qualities of sensation, various degrees of concentration as well as the directing of thought and senses.
This dancing has another meaning than we are accustomed to. Ancient dance was a branch of art, and in ancient time art served the purpose of higher knowledge and religion. Knowledge was expressed in works of art, particularly in dances, just as today we give out our wisdom through books. Thus ancient sacred dance is not only an aesthetic experience but a book containing a definite piece of knowledge. Yet a book that not everyone can read who would, which not everyone can read who will. ‚

From an introduction to demonstrations in New York 1924, ‚Gurdjieff’s early talks‘, 2014 Book Studio

Imagine that in studying the laws of movement of the celestial bodies you have constructed a mechanism for the representation of these laws. Every planet is represented by a ball and is placed at a determined distance from the central ball: the sun. You set this mechanism in motion and all the balls begin to turn and move reproducing the laws you want to study…..
Likewise in the rhythm of certain dances, in strictly determined movements and combinations of dances certain laws are vividly recalled. Such dances are called sacred. During the period of my wanderings in the East I often saw dances of this kind executed during the performances of sacred services in some of the ancient temples. 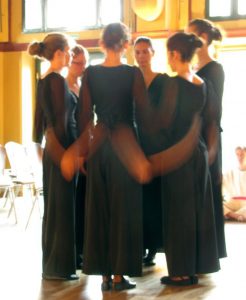 Under ´classes´, you will find information about the educational program. It has to be emphasized that, although this program focusses on Movements, it is impossible to pass on Movements outside the scope of Gurdjieff´s teaching as a whole.

Under ´Movements´ and ´Music´, you will find articles explaining the background of these subjects.

All photographs, videos or audio recordings offered on this site were made during our actual classes, rehearsals or performances. Please do not copy or spread this material without our explicit consent or, in the case of the photographs, the consent of the copyright-holders.

In case of any questions or comments do not hesitate to contact us.